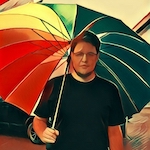 There is a plethora of options available when trying to solve the sticky table header problem. There's position fixed in a cloned header, full JavaScript solutions to keep the scroll offset and a mixed bag with many packages doing something in between.

All these solutions share the same problem: They remove the table headers from the browser's own width computation. If you have dynamic tables with cells that may change their widths as we do with our inline-editing functionality in OpenProject, the changing cells width will break the header widths since they are not in sync.

There is a draft spec for a stickily positioning an element: position: sticky.

A few years ago, position: sticky was available in Chrome when it still ran on webkit, and Firefox introduced support with v32.0 back in 2014.

The interesting part is, in Chrome, sticky works on table header cells as well. This makes it the easiest CSS-only solution to sticky table headers that do not have the above width synchronization problem. If you plan to use it, there are some hefty caveats, however. Primarily, this concerns browser support.

In current stable versions, position: sticky cannot be applied to the entire thead, but only on table cells. For sticky headers, you need to place the attribute on each individual <th>. There is an active bug for the thead issue and its still in discussion.

The feature works only starting Chrome 56, with some intermediary changes (such as sticky on thead's) until Chrome 58. On Firefox, position: sticky exists and works, but as position: relative, its behavior on table elements is undefined. You can read about that in the MDN for CSS position as well as this bug. There has been no news on this end for the past months, however.

In the past weeks, the bug has taken up traction and in late 2017, the functionality for table elements was fixed in Nightly. As of this writing (late January), this feature will land in Firefox 59.

To summarize, use position: sticky if you want effortless and fast sticky table headers that keep in sync with the widths of their column and can live with the fact that only recent Chrome versions are supported. It does fall back to scrolling headers on other browsers, however.

The following is a minmal example for sticky headers in Chrome. Link to jsfiddle.