In this post we create a database schema for our blog with DBIx::Class and scrape the surface of its capabilities.

DBIx::Class (DBIC) is a flexible Object Relational Mapper for abstracting SQL tables and queries within Perl. It allows us to specify SQL tables as classes and thus avoid writing SQL manually in our app. Yet for understanding this post, I assume you have at least some basic understanding of SQL.

Update 10/2014: sri wrote an awesome asynchronous wrapper around DBD::Pg called Mojo::Pg that works great alongside Mojolicious. If you're planning on using PostgreSQL and do not require the functionality that comes with a large ORM as DBIC (and also avoid their signficant overhead), you should check it out – It even has migration support :)

Nonetheless, I wrote the tutorial for DBIC, and despite the overhead, it provides quite some enjoyable convenience for larger applications, especially If you want to access the database schema in other modules.

Let's start with the basic terminology. As with SQL, DBIC needs some kind of table structure that defines the available columns within that table. In DBIC, the equivalent of a SQL table is the Result class: It is the single location where you define your data columns and relationships to other tables.

Assume you have a set of result classes defined, and you want to modify them. If you would work with the database directly, you would use SQL queries to search (e.g., SELECT * FROM), delete (DELETE FROM), etc.

In DBIC, anytime you want to modify data in that fashion, you create a ResultSet on the result class you want to work with.

We first define the schema we will be using within our app. We want to create and modify/delete blog posts. For this task, the basic model is very simple, as that is basic CRUD within a single table. 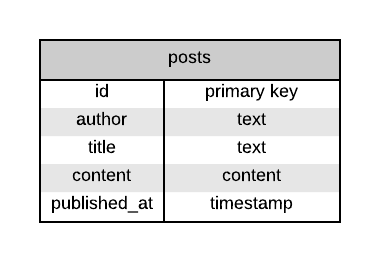 For the organization of our database schema, we have two options:

For the blog app in this series, we won't be needing a separated module. But when building your own schema, think about those two options. If there is the slightest possibility to use the schema in another project, use the second option without hesitation. The organization of two modules may be a tad more complex, but it will pay off in the long run.

For variant one, we add the following files to our application:

This adds two new modules to the app. Moblo::Schema is the main schema module, through which our schema can be imported later on. The module definition is really trivial, and we won't need to change it anytime soon:

The other module is Moblo::Schema::Result::Post, the result class we define our posts table in.

For our current feature set, this definition is all we need.

With the schema definition completed, we need a way to generate SQL definitions to create the actual database. The following script is a minimal example to deploy the tables to a SQLite database. Note that in this example, the database is created in the current working directory of the script.

Important: Keep in mind that if you later update your schema, you will have to think about upgrade paths in your database.

A more sophisticated, but also complicated option, is using a versioning toolkit that supports migrations. We employed DBIx::Class::Migration for this task. It is a powerful migration engine with support for multiple databases that reduces the pain of database versioning to an acceptable level. We will move Moblo::Schema over to migrations in one of the next posts. For now, let's concentrate on DBIx::Class itself and for the time being, using the generated SQLite DB is fine.

Side note: Creating a schema from existing database

Connecting to the schema

The SQLite database has been created with the contents of our schema. Before performing queries on a connected schema, we have to create a schema instance. Now the schema main module Moblo::Schema comes into play. You can use its inherited connect method to initiate a schema instance using a DBI data source string.

With the above schema instance available, actually using the database is now a breeze. You just create a ResultSet instance of your result class as follows and then CRUD away as much as you want!

Note: The attribute to ->resultset is the result class basename, not the table name and is case sensitive.

This should give you a glimpse of the basic manipulation functionality in DBIC. Of course, practical uses of a sophisticated ORM like DBIC will be much more complicated (think relationships, joins, advanced SQL-agnostic searching for the beginning) that we haven't looked into at all. There is much to learn, but DBIC provides means to achieve all your database needs.

In the next part, we integrate DBIx::Class schema into our Mojolicious app.

You can browse the app at the current state as well as its history on Github.